BATTERY LEAK TESTING AT EVERY STEP OF PRODUCTION

ATEQ has a variety of methods to leak test batteries throughout the production process.  Leak testing electrical vehicle battery cells, for example, begins with an ionic leak test of the battery cell pouch and ends with pressure leak testing the entire battery tray. 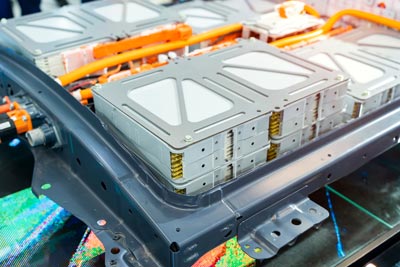 For battery leak testing of the cell, ATEQ presents the new patented B28 testing method which offers a safe low ionization voltage to ionize oxygen molecules in the air around the battery cell. If the battery cell is properly insulated, the instrument will show a 100% reading. If there is a leak in the battery insulation, ionized oxygen molecules will be able to flow through the hole and the ions will connect to the inside of the battery cell, without igniting it. This will show a 0% insulation percentage reading on the instrument and the operator or machine can then reject the part.

The B28 can be automated into a production line to support fast pass/fail testing of the cell.  The faulty part could then be taken to a rework bench for manual leak localization testing by using the Ioniq wand to find where on the cell the testing needle creates a zero percent reading on the instrument.

For more information about our range of battery leak testing products, see our Battery Brochure.

This website uses cookies to improve your experience while you navigate through the website. Out of these, the cookies that are categorized as necessary are stored on your browser as they are essential for the working of basic functionalities of the website. We also use third-party cookies that help us analyze and understand how you use this website. These cookies will be stored in your browser only with your consent. You also have the option to opt-out of these cookies. But opting out of some of these cookies may affect your browsing experience.
Necessary Always Enabled
Necessary cookies are absolutely essential for the website to function properly. This category only includes cookies that ensures basic functionalities and security features of the website. These cookies do not store any personal information.
Non-necessary
Any cookies that may not be particularly necessary for the website to function and is used specifically to collect user personal data via analytics, ads, other embedded contents are termed as non-necessary cookies. It is mandatory to procure user consent prior to running these cookies on your website.
SAVE & ACCEPT
Go to Top